The progression of the ultrarunning event, whose eighth edition is scheduled for September 23-25, is confirmed by record figures of participants and partners. The Adamello Trail Junior collected over 120 kids on Sunday, September 18th

The countdown is almost over. On Friday, September 23, Adamello Ultra Trail, the ultra-running event that retraces the Great War paths in the Alta Valle Camonica, will begin. The eighth edition of the event has once again posted record numbers, registering 719 participants (breaking last year’s closed number of 650) from 18 Countries (15 a year ago) and confirming itself as the benchmark event of the running season’s finale.

Once again in 2022, many brands have strengthened their ties with the ASD Adamello Ultra Trail organization, in favor of an event that is becoming a flagship, not only from a running perspective but also from a touristic point of view. Adamello Ultra Trail is a unique opportunity to seize to look after the historical and cultural heritage of Alta Val Camonica and Alta Val di Sole, a breath-taking area between Lombardy and Trentino hosting two nature parks such as the Adamello and the Stelvio ones.

Among the partner companies, the Brescia-based technical sportswear brand Mico Sport is going to celebrate its fifth consecutive year as main sponsor of the event, having established a long-lasting bond between the two organizations that share geographical origins and passion for sports and mountains. Athletes registered for the various races will receive a race pack with no less than four Mico Sport products, flagbearer of the Made in Italy quality.

Other major partner brands are confirmed, such as Edison – a leading company in the energy sector and also a long-tenured sponsor of the event – and SCARPA, an internationally renowned Italian brand of high-performance mountain footwear, which has signed a three-year sponsorship agreement in 2021.

Also crucial is the patronage of the Lombardy Region and support for the event from the Unione dei Comuni dell’Alta Valle Camonica and the Comunità Montana di Valle Camonica. The support of the Pontedilegno-Tonale Consortium witnesses the event’s commitment to promoting the area and its tourism, specifically in the transition from summer to winter.

Furthermore, a large group of sponsors is represented by Ferrino, Masters Poles, and new-entry DF Sport Specialist, in addition to the numerous local partners who continue to support the event, recognizing its positive impact on the territory and its community. A community for which the organization has planned new side events: on Saturday, again at the Centro Eventi in Vezza d’Oglio (Via del Piano, 1), music entertainment by Radio VivaFM will accompany the awarding ceremonies of the 90 km.

Adamello Trail Junior, the event promoting mountain running among youngsters (0-19 years old) and serving as a prelude to the most anticipated week, was held on Sunday, September 18, in Vione (Northern Italy). The 120 participants of various ages represent a new record (110 last year), confirming a growing trend even among the youngest.

The Adamello Trail Junior, therefore, kicked off the week of the Adamello Ultra Trail: the first scheduled event is the race numbers collection, which will kick off at 2 PM CEST on Thursday, September 22. In the evening (8 PM), the technical briefing will take place in the main square of Vezza d’Oglio: from 7 AM on Friday, September 23, the races will be on.

THE UPDATED PROGRAM OF THE EVENT 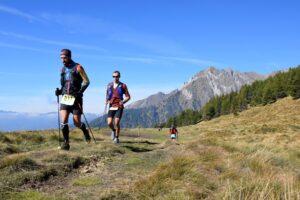